Last Saturday, members of the Royal Family, servicemen and the relatives of soldiers who served during the failed Gallipoli campaign came together on the one hundredth anniversary of the Gallipoli landings to remember those who had lost their lives.

25th April – traditionally known as ANZAC Day – commenced with the annual Dawn Service at Hyde Park Corner, by the Wellington Arch between the Australian and war memorials. Comedian Adam Hill led the 45-minute service, with Princess Anne in attendance. Similar services took place across Europe, in Çanakkale (Gallipoli) in , and in and .

At 9am, a short service and wreath laying ceremony, organised by the Gallipoli Association, took place at the Gallipoli Memorial in the crypt of 's Cathedral. It was attended by senior representatives of the British government, the Royal Navy, the Army, by the High Commissioners of Australia and , and other high-ranking officials from and .

A public commemoration service took place at the Cenotaph in . The event had been declared a UK National Commemoration event by Prime Minister David Cameron and was televised live to the world.

The public had started to line the streets in several hours before the service commenced. Big screens had been erected for those further from the Cenotaph to see the proceedings, which kicked into action at 10am when the Royal Marines military band began to play. Soldiers and descendants of Gallipoli veterans then marched into their designated areas around the Cenotaph, with the Royal family, represented by the Queen, Prince Philip and Prince William, emerging just before 11am. 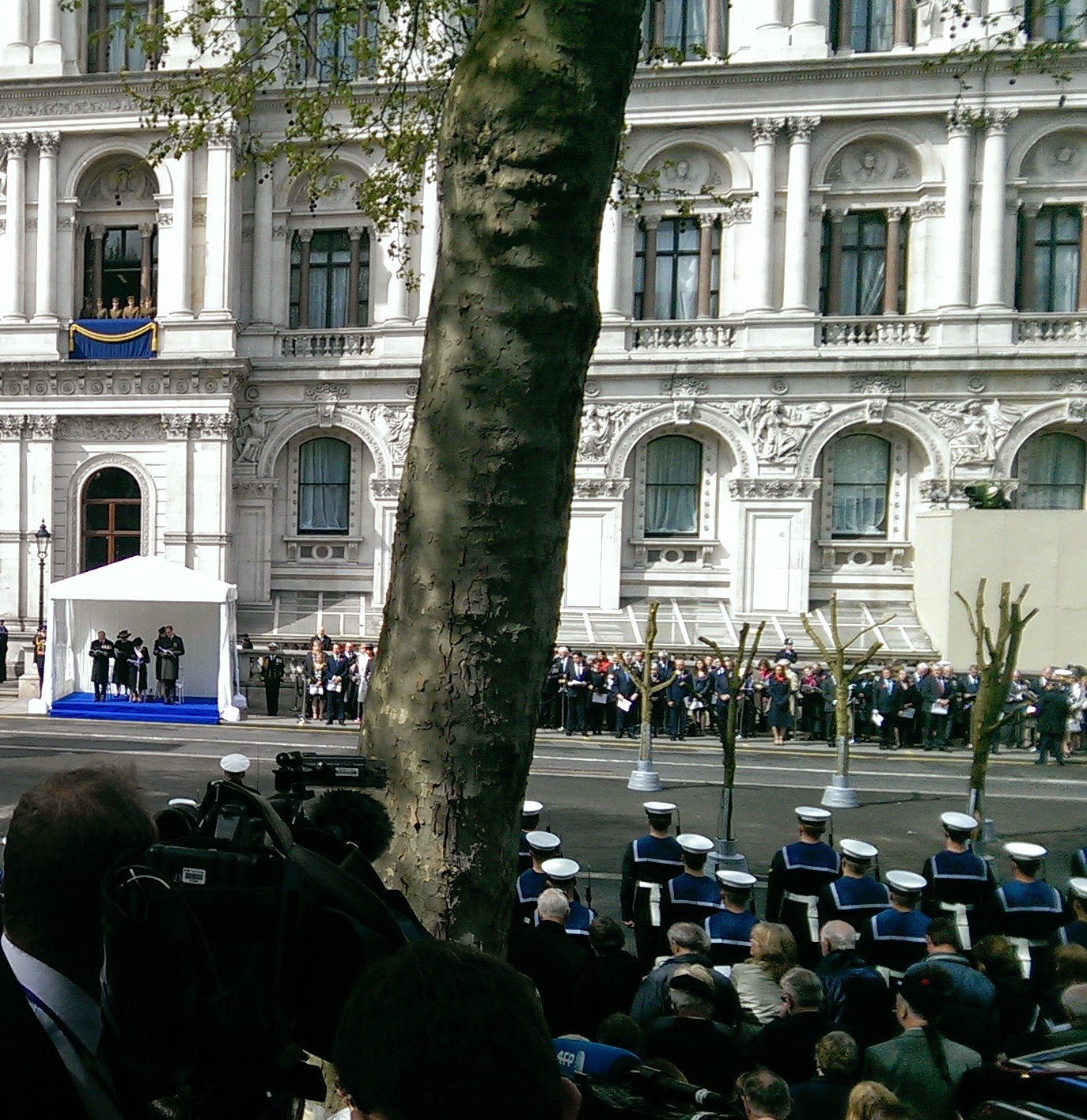 In the middle of the road was a small-scale reproduction of Nadir Imamoğlu’s oak tree sculpture Gallipoli 1915 (pictured left), which is displayed at the National Memorial Arboretum in Staffordshire. The leafless branches symbolise the hands of soldiers on the beaches of the , raised to distinguish them from their dead colleagues – a simple yet powerful reminder of the huge loss of life at Gallipoli.

A two-minute silence commenced when Big Ben struck 11am, followed by the Last Post, played by buglers from the Royal Marines. There was a reading of The Fallen by Laurence Binyon, first published in The Times in 1914.

"They shall grow old not, as we that are left grow old: age shall not weary them nor the years condemn. At the going down of the sun and in the morning, we will remember them."

The Queen then laid the first wreath and bowed before the Ceneotaph, which has engraved upon it THE GLORIOUS DEAD. She was followed by the British Prime Minister, High Commissioners of Australia and , the Turkish ambassador Abdurrahman Bilgiç and many other notables from and around the world.

There were prayers, readings by schoolchildren and hymns in between the national anthems of , , and the . ’s national anthem was sung by opera singer and Londra Gazete reporter Burak Gülşen. It was preceded by a reading of Atatürk’s message to bereaved pilgrims in 1943, read by Ambassador Bilgiç’s 14-year-old daughter Ecenur.
The Turkish Air Force Band performed Marche Mustafa Kemal Atatürk by Fazıl Çağlayan during the march-off. The event concluded just after midday. It marked a memorable and moving day when former foes were reconciled as friends.

Gonul Daniels, the Conservative Parliamentary Candidate for , was present for the service. She told T‑VINE: “I was honoured to attend the Gallipoli 100 year commemoration where the Queen and dignitaries laid wreaths for the fallen. It was a moving service that I will always remember not least for the beautifully sung Turkish national anthem along with the British national anthem.”

“The Ambassador's daughter gave a poignant reading of Ataturk’s message, which embodies feelings about Galllipoli: "….There is no difference between the Johnnies and the Mehmets to us where they lie side by side here in this country of ours….".”

Other commemoration events were held across the country during last weekend. A major exhibition called Gallipoli: Myth and Memory is also on show at the of the Royal Navy, in Portsmouth Historic Dockyard. It tells the Royal Navy’s story of the catastrophic Gallipoli Campaign of 1915, which caused over 200,000 Allied casualties with many deaths coming from disease. The exhibition runs until 31st January 2016.
Posted by Unknown at 16:00