The negotiations to reunite resumed on Friday on an air of positivity as the two leaders agreed on a number of confidence-building measures (CMBs). Among them was a decision by the Turkish Cypriot side to scrap visas at the Green Line checkpoints.

“Queues at the crossings will be a thing of the past”

The issue had been a sticking point for many Greek Cypriots who do not recognise the TRNC and had refused to cross the border due to the visa requirement. Others had complained about the length of time needed for the TRNC police to inspect and stamp each individual’s travel documents, creating hold-ups at the borders.

The move was warmly welcomed by many including the Turkish Cypriot Tourism and Travel Agents Association. Their head Orhan Tolun told an Anadolu Ajans reporter that “queues at the crossings will be a thing of the past”, helping to speed up the flow and number of people crossing between the two sides.

The borders were opened on 23 April 2003 following decades of the two communities living apart after the 1974 War, which had led to the creation of two ethnically-split sides in .

CMBs for anti-personnel minefields and Muslim property in South Cyprus

Other important developments included the Greek Cypriot side handing over co-ordinates detailing where 28 minefields were located in the foothills of the . These had been planted by the Greek Cypriot military in 1974.

This and further CBMs had been announced by the Greek Cypriot side two days after the conclusion of the TRNC Presidential elections in April. They included transferring the administrative control of Muslim places of worship in the south to Evkaf – the Turkish Cypriot Islamic Trust located in . Turkish speakers would also be hired to assist Turkish Cypriots requiring government services in the South, helping to fulfil a long-overdue constitutional requirement that both Cypriot official languages – Greek and Turkish – are used in the .

The resumed Cyprus talks – the first between Greek Cypriot leader Nicos Anastasiades and newly-elected TRNC President Mustafa Akıncı – took place at on Friday 15 May. They were conducted under the auspices of the United Nations and supervised by the UN Secretary-General’s Cyprus Advisor Espen Barth Eide, who afterwards wrote on Twitter: “Excellent atmosphere in the first formal leader's mtg between @MustafaAkinci_1 and @AnastasiadesCY. Focusing on their joint vision 4 # [sic]”.

The two Cypriot leaders have agreed to meet at least twice a month in what will be a ‘leader-led process’ to reunify the island, building on their first formal meeting on Friday where they shared their vision for a united federal . 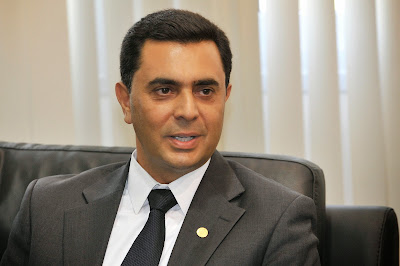 One of the first actions the new Turkish Cypriot leader Mustafa Akıncı took was to appoint Özdil Nami as his new Chief Negotiator. Nami, an MP for the Republican Turkish Party (CTP) and the TRNC’s Foreign Minister, has since resigned from his government post to take up the role.

Nami took over the reigns from Ergün Olgun on 4 May. Olgun, a former undersecretary to TRNC Founding President Rauf Denktaş, was one of the architects of the 2004 UN Annan Plan and had more recently served as the Turkish Cypriot Chief
Negotiator for President Derviş Eroğlu, who lost the elections in April.

Born in 1967, Nami is widely respected as a progressive force in Turkish Cypriot politics. A business graduate from the and with a Masters degree in Finance from the of , he has cut his teeth in politics through a variety of positions.

Between 1997 and 2000, Nami served as a Presidential advisor to Rauf Denktaş. He has headed up a Turkish Cypriot business group, and between 2008 and 2010, he was part of President Talat’s negotiating team. A CTP MP for Lefkoşa since 2003, Nami was selected to represent the Turkish Cypriot side at the European Parliament since 2005. Following the country’s general elections in 2013, he was made the TRNC Minister of Foreign Affairs.


In a statement announcing Nami’s new appointment, President Akıncı said: “Along with his [Nami’s] belief in a peace deal and an EU vision, I believe his experience and skills will enable him to make a serious contribution to the [UN] negotiations.”
Posted by Unknown at 11:55