Exclusive interview: Ata Demirer calls Demet Akbağ "fearless", says she will do anything for comedy 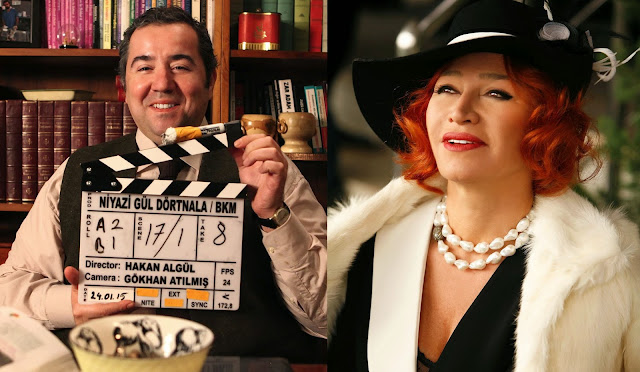 The on-screen pairing of Ata Demirer and Demet Akbağ spells box office gold in . The duo first worked together in the 2004 hit Vizontele Tuuba. Since then, 42-year-old Demirer, a stand-up comedian-turned-scriptwriter and actor, and actress 55-year-old Akbağ have appeared in five more motion pictures, among them some of the country’s biggest-grossing movies, including comedy hit series Eyyvah, Eyyvah.

Eyyvah Eyyvah 2 was ’s biggest film in 2011, with its predecessor and successor scoring top three annual box office listings. To date, the series has generated receipts in excess of $45 million for the film’s stars, its director Hakan Algül and their studio backer BKM.

That winning combination is back for new comedy Niyazi Gül Dört Nala (Niyazi Gül, The Galloping Vet), which opened the London Turkish Film Festival last week and goes on general release in today.

We caught up with the two lead stars on the red carpet at the film’s world premiere in .

Tell us about your new movie Niyazi Gül Dört Nala

Ata Demirer (AD): It’s based on a TV character I created. In the full-length feature film, we see a chapter in the life of Niyazi Gül, a veterinary surgeon who lives in and teaches university students, while researching into a formula, a new medicine for animals. It’s during this research that he gets caught up in all sorts of dramas.
Demet Akbağ (DA): my character Sultan Şahmerdan is a wealthy landowner with a farm and horses. She’s been around. She crosses swords with an old flame, Rıza Kabakoz, following a horse-racing bet, resulting in her meeting with Niyazi Gül and the plot thickens from there.

What inspired you for this movie - have you had experience with animals or vets?

AD: Yes, with animals. And, as an animal lover, I’ve also been around vets all my life, so I’ve been able to observe their work.
Working with animals wasn’t easy, we’re sure: any memorable moments?

AD: Working with humans isn’t that easy either! If you know how to handle animals, they are not at all difficult to work with.
DA: Obviously animals play a big part in the movie. One of the most challenging scenes is when the geese chase after us. That was hard work. It helped doing the filming on a beautiful sunny day in .

This is the sixth time you’ve worked together. How does it feel and what do you most admire about each other?

AD: I feel a very high level of happiness [working with Demet]. The thing I love the most about her is she will do anything for comedy. She is fearless.
DA: [Ata] has a very entertaining, very funny personality. We have a lot of fun off-camera, which no doubt you will see when the DVD is released. I love Ata as a person, friend, brother and a colleague. It’s always a pleasure working with him and our friendship has really grown since the first Eyyvah, Eyyvah. It’s a big sister-brother relationship – he was raised as a good young man! And as long as we enjoy it, I’m sure we’ll work together on many more projects.
Who’s influenced you the most, who do you admire outside ?

Action-hero films are all the rage in 2015. Would you ever play an action-hero?

How do you view the Turkish film industry?

DA: There’s lots of comedy, which brings big box office success. It upsets me that serious dramas with good storylines struggle [to be a commercial success] in . I’d like to see more of these types of films made. But overall, I’m really pleased about the growing interest in Turkish cinema.

Many older actresses in the and complain about the lack of quality roles. Is it also true for ?

DA: Yes. We actresses also share the same complaints as women. It’s the law of nature. It’s up to us women to write more and better roles for women, and things aren’t going to change until more of us pick up paper and pen. It’s not surprising the sector is dominated by men though: there are many more male scriptwriters and actors than women, so it’s natural they will write roles and create characters based on what they are most familiar with.

What do you love best about ?

Niyazi Gül, The Galloping Vet goes on general release in select cinemas across  from Friday 15 May.