It’s not every day a film crew comes knocking on your door to ask for permission to film in your premises. It’s even less likely to happen if you are a mosque and the story is about gangland .

Yet that’s what happened to Gönul Guney, chair of the UK Turkish Islamic Trust, who was contacted by actor Martin Askew. He was starring in a new movie inspired by his own life that was being filmed in . Central to the story was a mosque. Cue – the ’s first Turkish-owned mosque.

Gönul alerted T-VINE to the project in 2013: “When I first got the call from Martin, I thought it was a practical joke until he told me about his life and the storyline. Naturally, I was concerned about the potential negative comeback from the subject matter, but after speaking to [director] Andrew [Hulme], I was satisfied that the film would show Islam in a positive and good light”.

While her board of Trustees and the congregation shared Gönul’s concerns, financial needs ultimately determined their decision. The mosque required urgent repairs and the film producers offered them a good deal. They hired the mosque’s school, located next door to the main worship hall, as their production base for six weeks. Filming also took place inside the mosque over four days, when it was closed to worshippers.

We spoke to Andrew Hulme (pictured) at the end of 2014: the film had premiered in 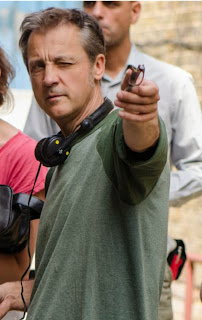 last May to critical acclaim and was set for release in February of this year. Andrew set the scene:

“When I met writer Martin Askew I found someone with a story so incredible I was compelled to try and tell it in cinematic form. Here was someone born into crime, whose uncle was ‘The Guvnor’ Lennie MacLean, yet had converted to Islam. Here was someone with a dark past who had managed to control his anger and aggression through religion, someone who had understood he needed to correct himself if he were to escape and survive.”

“Snow in is only loosely based on Martin’s experiences. Real names have been changed, real events dramatised because ultimately this is a drama and not a documentary. It's a journey through violence and guilt towards religion and possible redemption.”

“If Dave went off for jihad at the end, it would make people happy and confirm their preconceptions”

Delving deeper, it’s clear the making of the film is as intriguing as the subject matter. You would think a real-life inspired story set in multi-cultural that juxtaposes Islam against gangsterland would see a rush of support from the British film industry. Not so.

Andrew said he struggled to get backing for the project. While this was his first feature film, Andrew is an award-winning editor whose career includes a crop of well-received indie movies, such as Control, The American, Acid House, Gangster No1, along with acclaimed TV dramas Appropriate Adult and White Teeth. But his track record was no match for British prejudice towards a film that portrayed Islam positively.

As Andrew tellingly states, “If Dave [the central character] went off for jihad at the end of it, I think it would make people happy and confirm their preconceptions.”

He was forced instead to look abroad for support, finally securing the necessary finance from investors in , and . With money in place, Andrew then set about finding the right actor to play his lead, ideally a fresh face. His casting team randomly stumbled across their man in .

“We found Frederick Schmidt on a corner in a bad mood smoking a cigarette. He was our perfect Dave, not a privileged young kid from but someone who had experienced life and had a well of emotions to draw from.”

A new star was born.  plays Dave brilliantly as a happy-go-lucky Eastend geezer who makes a bad decision early on in the film, resulting in his best friend Tariq disappearing. Fearing the worst, Dave is engulfed by a deep guilt, whilst also having to deal with his world of rapidly escalating criminality. In his desperate search for Tariq, Dave stumbles into the mosque his Muslim friend was known to frequent…

received extensive guidance in the role from Martin Askew, who turned from being a co-writer to starring in the film as well, as bad Uncle Jimmy.


How a British gangster found salvation in Islam

Although Snow in Paradise isn’t an accurate representation of his life, we are curious about how Martin Askew ended up converting to Islam. The nephew of revered Eastend gangster Lennie "The Guv'ner" McLean, Martin is now a practising Sufi Muslim, his path to Islam shaped by his experiences in the mosque off .

“I took the Shahada in 2001. I had always been looking for another way of living. I was an avid reader of literature and books, philosophies and all religions fascinated me. I read books on Zen, and then tried to be Christian for a while, but when I read the Quran I realised it was very much like the Bible and that it was also my book too. It made so much sense to me and answered a lot of questions about life for me, but the major revelation came when I started reading about the Prophet Muhammad PBUH.”

“I have always been interested in the philosophical Superman theory. When I read how the prophet lived his life and how he came up against so many problems with such dignity and unshakable faith, he was my Superman and I knew then Islam was for me.”

“In the beginning it was very tough to commit fully [to Islam] because I was living a very shallow and self-centred lifestyle, full of instant gratification, ego and self-abuse, so it was quite a struggle to turn things around and practise regular prayer and not eat during Ramadan; but I loved every day. After about six months in, it all became very normal to me and then I found some real clarity of thinking. My body started to feel great physically too.”

Reflecting on his life-changing decision Martin says: “I would have liked to have embraced Islam younger than I was. I feel I have become a better son, father and friend to those around me. Life's journey for me is a wondrous surprise every day. It's so sacred it must always be enjoyed no matter what struggles you face.”

Any final pearls of wisdom? Martin responds by reciting the words of the prophet: "Happy are those who find fault with themselves instead of finding fault with others".

T-VINE is hosting a special screening of the film and a Q&A with Andrew Hulme and Martin Askew at the Rio Cinema on Saturday 6 June. See here for details