Britain’s Foreign Office – makes you ashamed to be British

On 31 August, during the hot summer of 1956, two British policemen were standing guard on a well-known EOKA terrorist, Polykarpos Yorgadjis, in . Suddenly armed men rushed down the corridor. The officers drew their pistols. Shots rang out. ‘The Battle of Nicosia Hospital’ had begun.

Four of Yorgadjis’s EOKA gang members were trying a desperate rescue attempt. In the ensuing gun fight Serjeant Eden shot and killed one gunman and then beat another to death with his gun. He received a George Medal. His colleague, Police Sgt Leonard Demmon was not so lucky. He was shot dead.

Only a month later three British police officers were walking down – ’s notorious ‘Murder Mile’ – when they were shot from in the back by an EOKA murder squad led by Nicos Sampson.

Sgt Hugh Carter from Herefordshire, and Sgt Cyril Thorogood (pictured) from Leicester and were killed. Despite being hit five times, Worcestershire Police Sgt Webb survived the attack. All three officers had volunteered to join the United Kingdom Police Unit Cyprus, which was set up to supplement the existing Cyprus police during the Cyprus Emergency, when EOKA’s Greek Cypriot terrorists fought to drive the British colonial regime from the island by murdering British soldiers.

Policemen were EOKA’s targets too. As a result a call went out for extra policemen. Many Turkish Cypriots joined the police, as did 986 British policemen and women who volunteered to help the local police in keeping the peace.

In all, sixty two policemen were murdered by EOKA: 18 British; 25 Turkish Cypriots; and 17 Greek Cypriots, as well as a Maronite and a Maltese officer. They and the many civilians (including women and a doctor, shot in the back by EOKA’s ‘heroic Freedom Fighters’) have long been the forgotten victims of the deadly guerrilla war in from 1955 to 1960.

On Saturday 8 November 2014, that historic wrong was righted. A memorial to all the British, Turkish and Greek police officers who lost their lives in one of Britain’s ‘small wars’, was unveiled in Kyrenia’s Old British cemetery by Sir Hugh Orde, President of the Association of Chief Police Officers, representing the 44 police forces of England, Wales and Northern Ireland.

The memorial was funded by the Police Roll of Honour Trust, a British Charity, as well as voluntary donations from police forces and individuals. Its unveiling was attended not just by members of the public in but by widows and relatives of those police officers, to lay wreaths to those who lost their lives long ago.

Naturally the Police Roll of Honour Trust and Kyrenia’s Royal British Legion Branch invited both the Greek and the Turkish communities to mourn their dead. The Turkish Cypriot Police were represented by the TRNC’s Chief of Police in memory of his Turkish Cypriot colleagues who paid the ultimate price for their loyalty and duty.

Sadly the bitter politics of the divided island intervened once again.

Despite invitations to the Greek Cypriot administration, its police force and the Orthodox Church, as well as the families of the dead Greek policemen to come to the multi-faith ceremony, no-one from the Greek side attended. The sad truth is that the so called heroes of EOKA and their propaganda version of the historical facts prevailed once again.

In a Greek Cypriot’s own words, “EOKA is a sacred cow, no one dare touch it . . . people are brought up in schools where EOKA is portrayed as a God sent liberator. . .”

In 1955 the local Cypriot police represented the colonial authority and so became an easy target. Police stations were bombed and individual officers intimidated if they did not sympathise with and assist EOKA's aims – ‘ENOSIS’, the union of Cyprus and Greece, with the infamous rider, ‘first get the British and then the Turks.’

Those loyal policemen who refused to cooperate with the terrorists were killed, wounded or ostracised as traitors and collaborators by EOKA. Today Greek Cypriot apologists still excuse the murders of their own countrymen by comparing them with collaborators like the French Vichy police. But for Greeks to compare ’s benign colonial rule on with the Nazi occupation of is just another big fat Greek lie.

However, the Greek Cypriots were not the only major absentees from the unveiling of the Memorial to the dead of the British Cyprus Police. Astonishingly there was no official representation of Her Majesty’s Government. Confirming Maggie Thatcher’s judgement of Whitehall as ‘that hotbed of cold feet’, a nervous Foreign and Commonwealth Office decreed that no serving member of the police, diplomatic or armed services could attend the unveiling in uniform to represent The Queen and honour the policemen who died for Britain, because the memorial was in The Republic of Northern Cyprus.

The British High Commission kowtowed to as usual. Because of its ghastly experience when the High Commissioner actually dared to turn up in 2009 to lay a wreath on behalf of the Queen at the unveiling of the memorial to the 371 dead British servicemen, the British High Commission once again ran scared of the Greeks. For the rest of his tour the unfortunate High Commissioner Peter Millett was treated like a leper by the Greek Cypriot administration: how dare a British Ambassador go to the Turkish non-state (the “occupied territories”) in the North and commemorate dead British soldiers? Who did he think he was?

But it is too easy just to blame the high-priced help at the BHC for the weak-kneed pusillanimity that passes for British diplomacy on . Cosy in their very well-funded staff jobs in ,the BHC just want a quiet life.

The real villains lurk in , where the Foreign and Commonwealth Office is more worried about offending Greeks than recognising the dead who gave their all for . Desperate to placate to ensure gets Greek support in the next horse-trading vote in , the FCO adopted its usual spineless pre-emptive cringe to matters Cypriot.

The hypocritical weasel words came from the Minister Lidington himself: “We pay tribute to those who lost their lives during the Emergency Period. . .But HMG’s focus on the island is currently how to help
Cypriots achieve a better future together, and we do this by supporting the UN-led settlement negotiations to re-unify the island.”

The High Commissioner and the British High Commission know they should hang their heads in shame. But in they dare not do the right thing. Their only defence is to point at the spineless FCO which has always, on its own admission, “had a bit of a blind spot on and the TRNC.”

Her Majesty’s Government’s cowardly absence from the ceremony to honour the murdered policemen is an insult to the dead: British, Greek and Turk, all of whom died for .

Last Saturday, the FCO’s cowardice and hypocrisy made decent folk ashamed to be British. 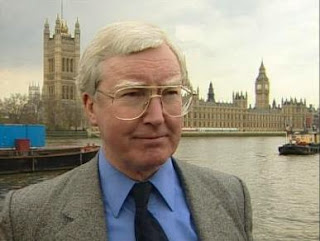 This article has been updated from the original, which appeared in Today. Colonel John Hughes-Wilson (pictured) served in the British army's Intelligence Corps and the Special Services, seeing action in Cyprus (where he was head of Military Intelligence after the Occupation of 1974) ,in the Falklands, Arabia and Northern Ireland- as well as what he describes as "the dangerous jungles of NATO and Whitehall," which gives this article added authority.

He is an internationally-acknowledged author and battlefield expert, a frequent broadcaster for BBC TV, especially at the annual Cenotaph Remembrance service ,with David Dimbleby , and a member of the editorial board of RUSI, the Royal United Services Institute, He lives in the TRNC.


RELATED ARTICLES:Girne Memorial unveiled to police officers killed during the Cyprus Emergency, 11 November 2014The Queen’s representatives ordered to stay away from Cyprus police memorial, 30 October 2014
Posted by Unknown at 22:05