Thousands of people filled on Sunday 1st June for Turkish Day in – the first time a Turkish cultural festival has been held in this iconic central space. The event had been postponed for few weeks as a show of respect to those who had died in the Soma mining disaster in . When it did happen, Serkan Kurt and Erdal Koyuncu, the two founders of Turkish Day in London, promised to, ‘’Bring together Londoners, visitors and the Turkish Community in the United Kingdom to enjoy the many Turkish delights on offer, from the food to the music, to the dancing and arts.”

The event ran from noon until 8.30pm....and what a day it turned out to be! The sun was shining as British Turks from and the suburbs turned up in great numbers. You could feel the energy among the people, with many friends and relatives unexpectedly meeting each other, like you do at Turkish weddings. 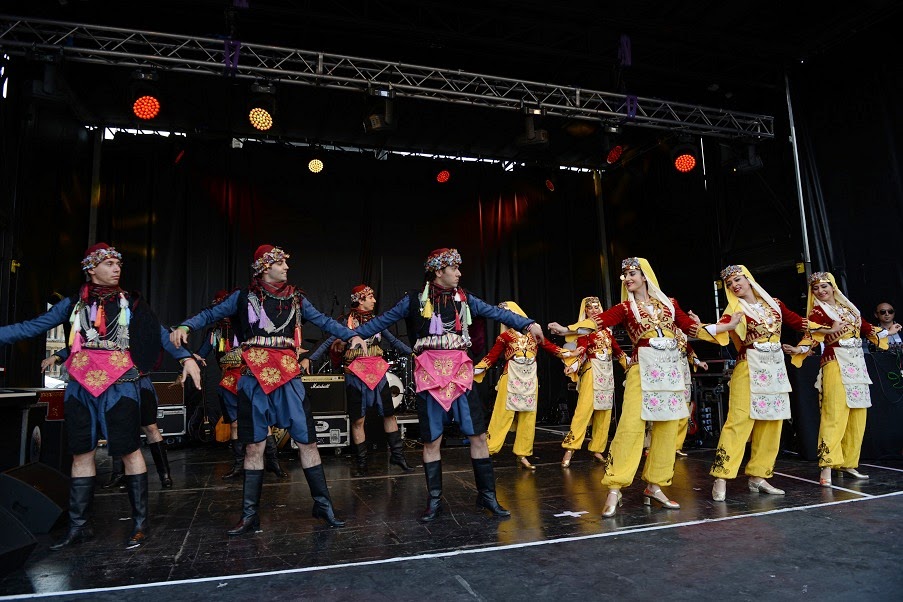 The entertainment was lively and captivating throughout the day. Turkish pop star Selcuk Yapar and rock band Sudden Exit entertained the crowd during the afternoon session. The Ottoman Marching Band (Mehter Takımı) mesmerised with their show both on stage and as they marched around the Square, repeated three times during the course of the day. This was followed by a spectacular stage show by traditional Turkish folk dancers in their elegant and colourful costumes.

Crowds waited in anticipation till 7 pm for the top billing Can Bonomo – a popular rock and pop singer who was ’s Eurovision entry in 2012. I must say he lived up to his reputation with an exhilarating performance that lasted for one-and-a-half hours. The crowd joined in the singing and dancing, waving Turkish and flags, really enjoying themselves. It was a fabulous finale to a very enjoyable day for thousands of people who made the effort to be there. More than 30 stands were located all around the with a variety of food stalls offering a great choice of Turkish cuisine, awhile others sold Turkish trinkets or did face-painting – there really was something for everyone.

I hope that this event continues to take place at this prestigious stage annually to promote Turkish culture, art, music and food.

Credit must go to the organisers and commercial companies who backed the initiative. Turkish Day in was organised by Sky Management and Regalis Group, supported by the Greater London Authority and the Mayor of London, Boris Johnson. Sponsors included Atlasjet, Anatolian Sky Holidays, the Acibadem Hospitals Group, İşbank, and the Turkish Tourism Office.
Posted by Unknown at 11:09