The Mid Summer Ball celebrates a decade in Cyprus this Saturday

It’s been ’ biggest annual club event for years and this Saturday The Mid Summer Ball celebrates its tenth birthday at The Colosseum Club in Girne.

Ironik, who’s had three top ten hits including Tiny Dancer which featured Chipmunk and Elton John, headlines. He’s joined by Rinse FM’s Sam Supplier and MC Dadge who’s warmed up the crowds for superstars such as Nelly and Flo-Rida. There’s a special PA from Moy Moy – one of the ’s hottest new singers whose vocal style straddles R&B, Reggae and Hip Hop effortlessly. They line-up alongside residents Ramsey and Fen, Original Memzee, and local favourite D-Loose from Dream Live FM.

Borne out of the UK Garage scene, The Mid Summer Ball (MSB) is an annual celebration of British dance music. Its first outing was in Lion’s Garden, Mağusa, back in 2005 when legendary Turkish Cypriot DJing duo Ramsey and Fen, together with friend and fellow DJ Jason Kaye, aimed to bring a slice of Ayia Napa over into

Setting the bar high with their first line-up in 2005

Oblivious to politics, their inaugural event turned out to be a baptism of fire. The South Cyprus authorities went on television pleading with youngsters not to attend the event in the “occupied territories”. Some went as far as blocking roads and vandalising the coaches due to carry clubbers across the border. But the intimidation efforts failed as thousands packed out the venue to hear a star-studded line-up that included Ras Kwame, Artful Dodger and Rampage.

“We’re not politicians, we’re just promoters and DJs. All we did was put on an event and our flyer had a map on the back showing how to get from Ayia Napa to Mağusa, which we distributed all over [the island]. Once the [Greek Cypriot] authorities were aware, they just freaked out. But they ended up doing us more promotion than we ever could by sticking our flyer on the TV. There was a huge traffic jam on the night as people in the south tried to cross to the north to get to Lion's Garden,” MSB co-founder Ramsey told T-VINE.

The international DJs, MCs and crowds have been back every summer since. Ramsey estimates that some 60 British artists – urban dance music maestros from BBC Radio 1, Kiss FM and Capital Radio – have graced the MSB decks or MCd for them, including Steve Sutherland, Matt ‘Jam’ Lamont, DJ Pied Piper, MC Creed and Mr Buzzard.

'The Mid Summer Ball's transformed . Back in the 90s, you’d be hard-pushed to find a club with a set of decks let alone spinning House & Garage'

Their annual presence helped transform ’ primitive club scene: back in the 1990s, you’d be hard-pushed to find a club with a set of decks let alone spinning House and Garage!

Today, North Cyprus’ coastline is adorned with many stunning and well-equipped venues capable of hosting the world’s best DJs. The now year-long scene has been fuelled by local dance music radio stations such as Dream Live FM, which syndicate shows from to keep the TRNC locked to the pulse of the underground. The music comes into its own though when the Londoners arrive each year, bang on in the peak summer season when the temperature is set to scorching.

In 2014, the MSB team took a year out and it’s rumoured their absence was behind the downturn in British tourists. They could be right: British-born Cypriots and friends are known to book their holidays to coincide with the annual bash. The audience, a mix of Old Skool ravers and those not yet born during the heady days of UK House and Garage, love the safe and unpretentious vibes of clubbing. But it’s not been an easy ride.

“It’s not easy doing club events in . The local authorities can make life really difficult with their taxation and other rules. But we’re proud to be doing it for our country as Turkish Cypriots,” says Ramsey as he prepares to jet out to the ’s third largest island for the big birthday weekend.


When asked about his MSB highlights of the past decade, Ramsey pauses, considering what he can say for print media. Chuckling, he offers two moments from the first year: “One of the DJs popped the question to his lady live at the [Mid Summer] Ball. They also got me to do body popping on stage.”

It may be hard to believe seeing him now, but back in the 1980s a trim Ramsey, who grew up in Hackney on a musical diet of soul and rare groove, could be seen weekly on television throwing some moves as a studio dancer on Jonathan Ross’s Channel 4 music show Soul Train.

Turning his talents to the turntable, Ramsey has been inspiring the masses to move for nearly thirty years and he remains as enthused as ever about clubbing. Working with his partners Hass ‘J Junior’ Redif and Recki B, their future plans include taking the MBS concept to Tenerife and .

In , Ramsey also detects a major sea-change in attitudes between the two sides compared to when MSB started in 2005. Positive relations between the two Cypriot leaders, Akıncı and Anastasiades, is spreading to other areas, generating greater cultural co-operation across the divide.

He recounts a recent development: “Our media partner Dream [Live] FM has invested big into its infrastructure. Its two frequencies are heard not just in , but also and – they keep getting requests from everywhere! It’s so powerful, their broadcasts keep jamming up the airwaves for a Greek Cypriot station, so they’re working out a deal to stick to certain frequencies to ensure both radio stations can be heard island-wide.”

MSB 10th anniversary bash: “It’s gonna be a big night. We’ve got 10 DJs and four PA’s, and a ton of giveaways” 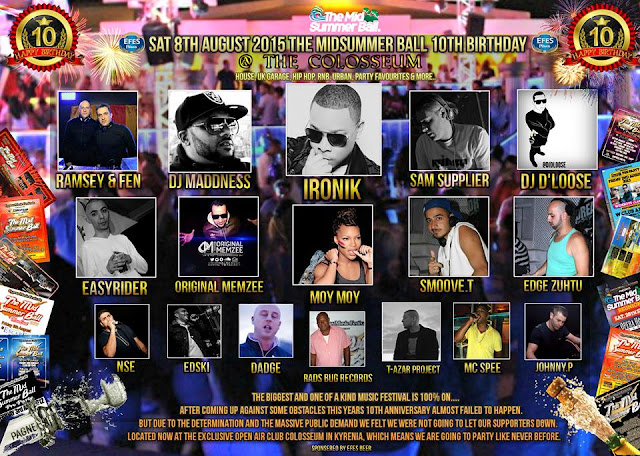 Swinging back to this weekend’s shenanigans, Ramsey says: “It’s gonna be a big night. We’ve got 10 top DJs and four PA’s, and a ton of giveaways: VIP passes, beach party tickets and more.”

As any regular MSB clubber will know, if there’s one party, there’ll be more. Having brought some of the ’s finest urban DJs to perform and holiday in Kıbrıs, their idea of fun is not by grooving to A La Turca beats. Oh no. If the clubs aren’t delivering your vibes of choice, just create your own party instead: find a cosy beach, set up some speakers and then invite the masses through radio and social media.

“Me and the other DJs would go mad just sitting around the pool all day. We always throw another party or two. Sometimes more depending on how the first ones go. We’re definitely doing the Party on the 10th and I’m DJing at Dream Live FM’s second birthday party [at Ice Club on 12thAugust]. Dream’s got a big surprise PA – it’s gonna be huge,” says Ramsey.

If you can’t make the Mid Summer Ball, you can catch every beat via Dream Live FM’s live broadcast from The Colosseum. Those on the island can tune into 104.2 FM, or listen worldwide via dreamlivecyprus.com