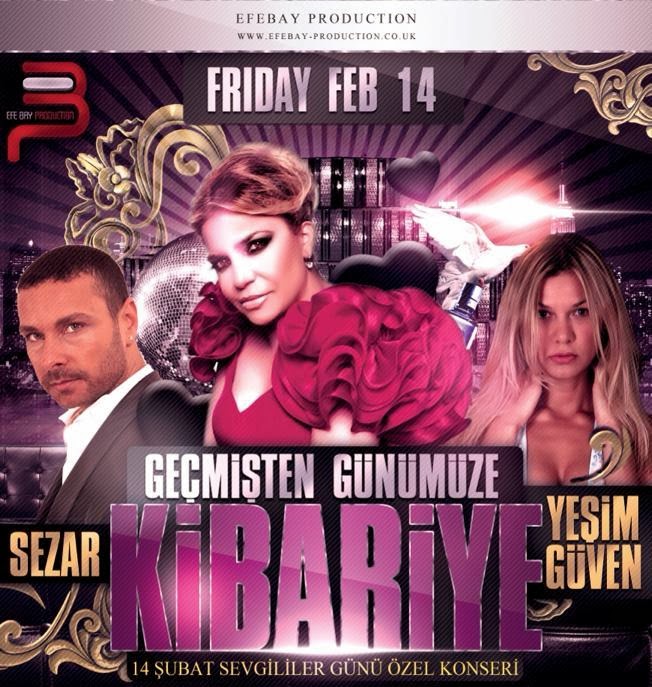 Turkish star Kibariye is the headline act for a concert being organised on Valentine’s Day by Efe Bay Productions. Tickets are selling fast for the dinner and dance affair that will take place at the plush Prince and Princess Banqueting Suite in on Friday 14 February. The event is hosted by top Turkish model Yeşim Güven with talented singer Sezar as the evening’s support act.

One thousand guests are expected to attend the cabaret-style concert to see Kibariye live. The 54-year old singer became an instant hit in Turkey with her debut release in 1981 Kimbilir and has gone on to release a further 31 albums. With a distinctive smoky voice and her repertoire comprising a popular mix of Arabesque and Pop songs, she continues to enjoy a huge fan base in and outside of . The star will be accompanied by a 10-piece band for her gala performance that will run for two hours. Expect plenty of songs for lovers! Sezar Uğur Soy, who has been in great form guesting at ’s iconic Cyprus Meze Bar, will be warming up the crowd with his covers of popular Turkish hits.

Doors open at 6pm and the event, which is sponsored by Diamond Wines Cash and Carry, runs till late. Entrance is £49 per person, which includes a three-course fixed meal: hot and cold meze, chicken dinner (vegetarian option available), and fruit platter, with unlimited soft drinks and paying bar. Those wanting to get close to the action can indulge in VIP seats by the stage priced at £69.

Tickets are selling fast though, so promoter advises those interested in attending not to delay in buying their tickets to what promises to be a very memorable night.  's production company was behind last year's sellout Bülent Ersoy concert.