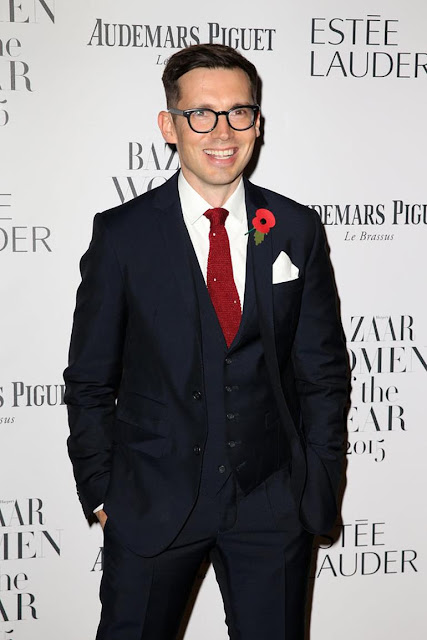 37-year-old Erdem Moralıoğlu picked up the award, alongside a host of famous female winners who were honoured by the magazine for their contributions to the creative industries and society.

Erdem was the only male to be honoured at the celebrity-filled awards ceremony held last Tuesday at Claridges in central . Last year, the same award was won by actor Benedict Cumberbatch.

The fashion designer’s profile has grown spectacularly since launching his own label in 2005. In the past decade, he has dressed some of the most famous ladies on the planet, from film stars such as Keira Knightley, Sarah Jessica Parker, Julianne Moore, Jessica Biel, Anne Hathaway, and Marion Cotillard, to fashion icon Alexa Chung and royalty. Kate Middleton, the Duchess of Cambridge, is among his biggest fans and regularly wears his dresses for her public engagements.

About Erdem Moralıoğlu
Erdem is Canadian-born, with a Turkish father and an English mother. He grew up between and .

He graduated in fashion from in , before working as an intern for Vivienne Westwood.

In 2000, he moved to to study fashion at the Royal College of Art and after receiving his master's degree in 2003, he moved to where he worked alongside Diane von Furstenberg. Two years later, he relocated to and launched his own ready-to-wear label, Erdem.

The couture label has become renowned for its elegant designs, where delicate ideas mix with bold fashion statements that use experimental textiles and vibrant prints.

Today Erdem is sold in over 170 of the most exclusive retailers around the world, such as Barneys and Bergdorf Goodman in , and Selfridges and Harvey Nichols in .

In , his clothes can be found in and in branches of Harvey Nichols, Polar Moda and Beymen. Splash in Limassol, south , is also an official stockist.

Over the summer, Erdem opened his debut flagship store, located at  in .
Posted by Unknown at 21:14