Sultan Kösen, the world’s tallest man, has become a huge hit with the Australian public on his first visit to the country. The 31-year-old farmer from Mardin in south east , had flown to to attend the Anatolian Turkish Festival and also took time to visit a nearby school. During his week-long stay in the city, Kösen attracted widespread public and national media interest, with his visit covered by a host of media, including AAP, Channel 7 and ABC News.

The rain failed to dampen spirits at the two-day Anatolian Turkish Festival, which took place at  last weekend. Towering over everyone else, Kösen was one of the star attractions. Also on the bill was Turkish pop star Yusuf Güney and the Mehter Military Band, alongside many local Turkish entertainers.

During his stay in , Kösen also visited at the invitation of head teacher Deniz Erdoğan. The school children, like the wider Australian public, were captivated by Sultan’s huge physique. They queued to get signed autographs and have pictures taken with the gentle giant, who uses crutches to assist his movement, while talking to the children and media through his interpreter Fatih.

"It was a fantastic experience for the students and staff" said Mr Erdoğan. Those present felt privileged they had been the only school visited by the big man and the head teacher appreciated the emphasis Sultan Kösen had placed on the importance of education and diversity when he addressed the school. 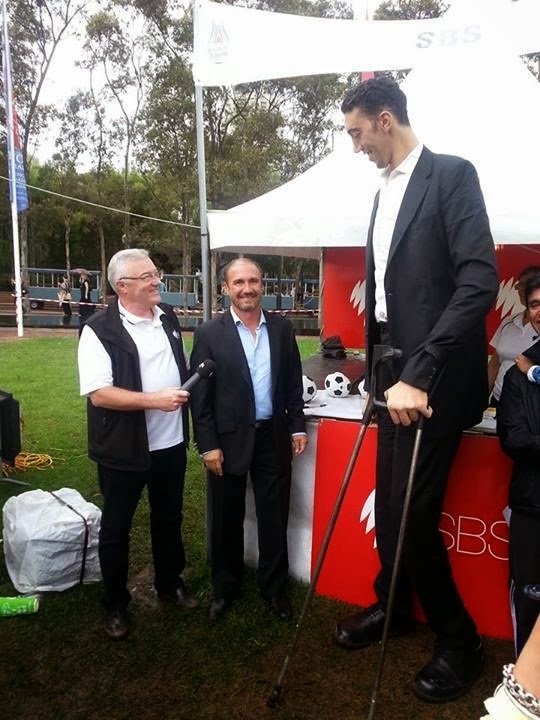 Kösen was crowed the tallest man in the world by the Guiness World Record in 2009. He measures an astonishing 2.51 metres (8 feet, 3 inches) tall and also has the largest hands on the planet, each one measuring 28.5cm from the wrist to the middle finger. His extraordinary size is due to a condition known as pituitary gigantism, involving an over-production of growth hormones.

His international fame helped find a cure for his condition. In 2010, American doctors performed surgery to remove a tumour affecting his pituitary gland, which then stopped his growth. He said: “the surgery saved my life.”

Middle & bottom photos from Facebook.com/Turks in Australia
Posted by Unknown at 12:22