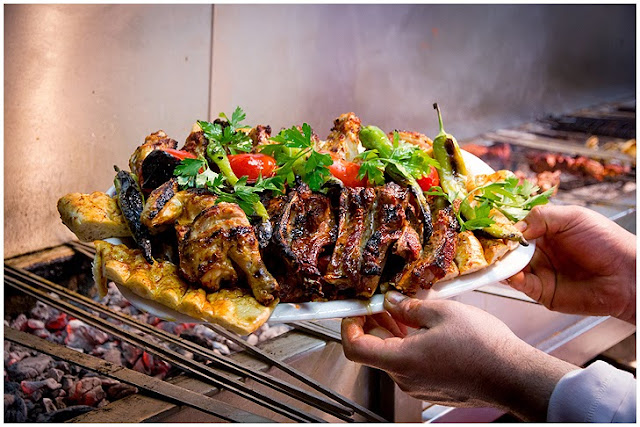 Kebabs are to Turks what fish and chips are to the English, an integral part of our food culture. The first wave of Turkish immigrants in arrived from in the 1950s, bringing with them their key cultural traditions.

By 1966, the first British kebab restaurant had opened: Hodja Nasreddin in Newington Green, . It inspired others to do the same, but they mainly catered for fellow Turkish residents. It wasn’t until the 1980s and the second wave of immigrants from that kebab culture really started to take off in .

Once upon a time, the average Briton regarded kebabs as cheap post-pub fodder. Trek down Green Lanes, Harringay – the Turkish equivalent of China Town – today and you will see an area teeming with quality kebab restaurants, all packed to the rafters. The food is tasty, nutritious and great value for money, especially when compared with similar restaurants serving Italian, French or Modern European cuisine.

Such is the rise in the popularity of the oçakbaşı (open-fire grill) that in the past few years, two of London’s best kebab houses, Gökyüzü in Harringay and Meze Mangal in Lewisham, have topped Trip Advisor’s rankings, beating Michelin-starred restaurants along the way.

Worth £2.2 billion to the economy, the kebab industry is one of ’s big success stories

It’s a far cry from the terrible press it had to contend with back in 2006, when the news was full of nasty revelations about what went into kebabs and the less unhygienic premises some were sold in. The main industry players, many of whom are from ’s Turkish, Turkish Cypriot and Kurdish communities, have worked hard to transform that image and the results speak for themselves.

The investments made into sourcing quality food supplies, cooking up delicious kebab dishes, served in a great dining environment with warm hospitality have all paid off, helping to make the kebab industry one of Britain’s big success stories. The sector is now annually worth £2.2 billion to the British economy, generated by over 17,000 businesses that employ 70,000 people. Each week, some 200 producers supply thousands of outlets, both restaurants and takeaways that between them sell over 2,000 tonnes of doner meat and 700 tonnes of chicken to consumers. And we’ve yet to talk about the şiş and köfte varieties!

It’s big business and it’s become an integral part of our culture, so it’s high time kebabs were recognised for their contributions to British society. T-VINE talked to Ibrahim Dogus and Mustafa Topkaya, who along with Timur Ekingen (pictured below in same order, L-R), set up the British Kebab Awards. 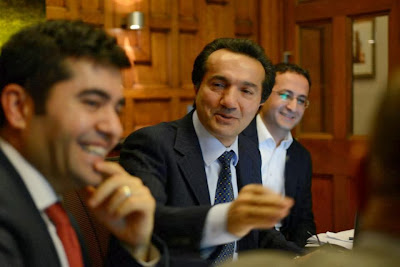 “Our aim is to help promote and gain recognition for kebabs, both among consumers and within wider business, to reassure the public about the quality and to help raise standards,” said BKA jury chairman Mustafa Topkaya, himself a successful businessman who made his fortune in the kebab business. He opened Archway Kebab in 1984 (his brother and nephew now runs this), before adding Kebab Delight in Wood Green in 1986, and North London’s original ‘çorbacı’ Istanbul Iskembecisi, in Dalston, in 1989.

Topkaya: “At the beginning we served curious Brits. Now consumers want to be signposted to the best places”

Originally from in , Topkaya said it was natural for new arrivals like him from Turkey or Cyprus to jump into the kebab business: “This is our culture. We grew up with kebabs and when we came to and saw the massive success of burgers, and knowing our kebabs were much better in every sense, it seemed like a good move.”

He has witnessed tremendous change in the sector over the past thirty years. When he first started, Topkaya faced many challenges: “There wasn’t the businesses supporting the industry that now exist. I had to bring equipment over from . I had to be at Smithfields at 5am for the meat then go to the market for fresh vegetables, the bakery for pide. By the time I got back to the restaurant, I was exhausted. But we did it. We prepared the food and served the food, working very long hours.”

“Today, everything is much easier. The sheer size of the sector has attracted a range of businesses that serve the kebab trade, operating the length and breadth of delivering everything you need to your door. However, the kebab business is still very labour intensive,” he adds.

The customers have changed too. Topkaya said: “At the beginning we served curious Brits. We were educating them about our food. Over the years kebabs have grown massively in popularity: price, quality and taste have all played their part. Now consumers want to be signposted to the best places.”

brahim Dogus is a man constantly on the go. A well-known activist in the Turkish-Kurdish community since his teenage years, today he is a director of think tank Centre for Turkey Studies (CEFTUS). In 2009, he leapt into the restaurant business by opening his own Mediterranean and Middle Eastern diner Troia on the South Bank.

Following the plunge in reputation for kebabs in 2005-6, which harmed the sector very badly, Dogus, along with Mustafa Topkaya and journalist Timur Ekingen (currently the editor of London Turkish Gazette), worked on various initiatives to assist the sector. Supported by Nadhim Zahawi, the Conservative MP for , they launched the BKA in 2012 and hosted their first awards ceremony last year.

Dogus told T-VINE: “The British Kebab Awards is about recognising the A-Z chain of businesses that make-up the kebab industry, of which 80% are from the Turkish, Turkish Cypriot and Kurdish communities. We want to increase the sector’s prestige, to help protect these businesses and enable them to grow. Greater motivation will result in more investment – just look at what’s happened to Asian cuisine.”

“We used the British Curry Awards to develop our own awards scheme,” he adds. 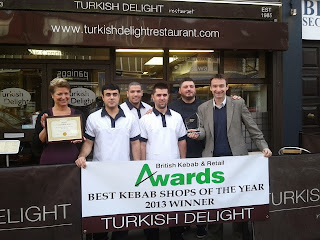 With the 2013 winners, such as Manchester’s Turkish Delight, and runners-up all reporting that business was up, some by 30%, it was inevitable interest in this year’s competition would increase. Hundreds more eateries were nominated and tens of thousands of public votes registered.

Local politicians and the wider public were asked to nominate their favourite kebab takeaway or restaurant, or the eateries could enter themselves by submitting a form. Hundreds of nominations were received for the 12 categories on offer including: Best Restaurant, Best Delivery Restaurant, Best Kebab Newcomer, Best Chef, Young Restaurateur of the year, Best Support Business, and Outstanding Contribution to the Sector.

The organisers took on board feedback about last year’s scoring and have employed a more sophisticated points system for 2014. Dogus explains:

“We wanted to better reflect the various criteria that make up quality kebabs: health and hygiene, the dining environment, service and of course taste. The health, hygiene and environment scores are based on those recorded by local authorities, so everyone can have confidence these are made objectively in accordance with legally set standards. Kebab houses scoring 5 (the top mark) by their local authority will have 500 points immediately added to their tally.”

“Those who are recommended by their local councillor or MP will receive a further 250 points. Local politicians were all invited to take part. They’ve consulted with their constituents and put forward their best local kebab houses. Then there’s the public vote: every vote a kebab house receives from a member of the public scores two points for them. The businesses that get organised and galvanise their customers to vote for them can quickly rack up the points,” said Dogus.

Those who scored the most were shortlisted (see here for list: http://ceftus.org/2014/01/05/the-2nd-british-kebab-awards-shortlist/#.UtSL0tJdWGN )

Then it over to the BKA judges to decide the winners. The 2014 BKA judging panel is drawn from across the entire kebab industry (sadly no women, but BKA have promised to rectify that for 2015). Chaired by Mustafa Topkaya, they include: Keith Vaz MP, Jonathan Reynolds, İşbank branch manager Hasan Candan, fruit and veg. importer businessman Ali Matur, Olay newspaper owner Nural Ezel, accountant Altan Kemal, Paul Luther, CEO of Curry Special, and Mark Evans of QV Foods. 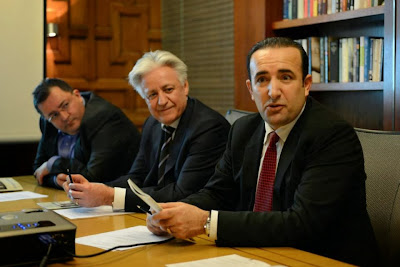 The BKA judges went about visiting those shortlisted. From dining experience to inspecting the kitchen and storage facilities, every aspect was reviewed and reports assessed at last week’s judging night before the winners were decided.

Kebabs big in , yet to penetrate – if BBC Wales Newsroom is anything to go by

Sponsored by Just Eat, the UK’s biggest online food delivery service, over 400 people – the cream of the industry, the nominees, politicians and media – will attend tonight’s gala event at the Sheraton Park Lane to see which kebab houses are crowned the 2014 BKA winners.

However while those of us in laud over the growing interest and prestige of kebabs it is by no means the same picture around the country. When Mustafa Topkaya was recently interviewed by BBC Wales he was told that several members of the Newsroom have yet to try a kebab.

We may be spoilt for choice here in the capital, but the options and standards are still lagging outside, with many British consumers yet to be convinced that kebabs really are great. Topkaya says the situation is not helped by some in the industry who constantly rubbish kebabs, even though they have made their fortune from them, or who refuse to get involved in sector-wide initiatives to help other businesses develop and improve overall standards.

“Believe in kebabs and be proud”

Topkaya says: “We have to work together as a community to remove the stigma of being a kebab business owner. There is nothing to be ashamed of. If Jamie Oliver can come from cooking in his family pub to being one of the top chefs and food personalities in the world, then so can we! We need to believe in what we do and be proud.”

Hear, hear! More power to the kebab we say, and may the best kebabs win tonight!