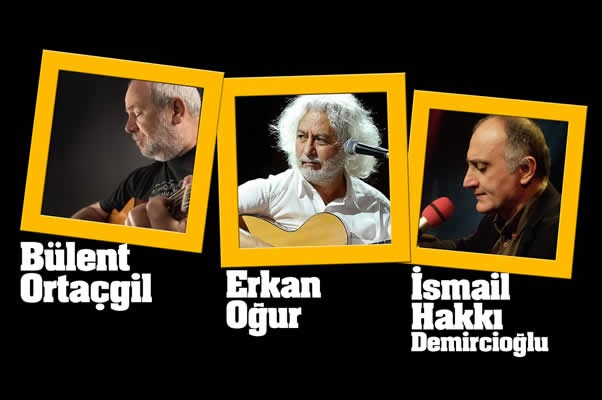 Bülent Ortaçgil is a guitarist, composer and singer who first stared recording music in 1971. His career has led him to work with some of Turkey’s leading musical lights including Onnu Tunç and Erkan Oğur, performing on numerous albums that have straddled multiple musical genres from Rock to Jazz, and Turkish Blues.

Oğur is regarded as a master of the kopuz and bağlama lutes. He plays many other stringed instruments and invented the fretless classical guitar while he was working with American Blues artists such as Robert 'One Man' Johnson in the USA in late 1980s. His improvised style and Turkish Classical and Folk music compositions, which include award-winning film scores, have made him popular across Turkey and he also regularly performs abroad.
İsmail Hakkı Demircioğlu plays numerous stringed instruments including bağlama and bass guitar. He has performed on the albums of numerous artists and regularly plays with Oğur, the two of them releasing three albums between 1998 and 2003.

The trio have been touring Turkey and Europe since 2014. Here they are live at GarajIstanbul last April:
Mor Dağlar  and İki Keklik / Bülbülüm Altın Kafeste / Mağusa Limanı

A few tickets are still available – buy online or from the venue on the night. The event is organised by Studio Live London, who have organised numerous Turkish concerts in the capital including Emre Aydın and Mor ve Ötesi. Saturday night’s concert is sponsored by Ersan & Co Solicitors.