Yet again we march

Yet again we march. With arthiritic knees, painful backs, we march on.
What are these compared to the suffering of refugees,
victims of wars, destruction.
Victims of Western foreign policy, western greed.

We march to demand compassion, justice and humanity for refugees.
Refugees, facing inhumane treatment, at home and in .
The where they thought they would be embraced with
compassion, humanity, kindness.
The where they meet instead with barbed wires and Molotov cocktails.
Not to mention an uncaring reporter’s cruel kicks.

A leaflet I see sums it all up. A man forced to fight Mediterranean waves,
his clumsy dingy having been overturned.
Words in the bubble read “we are not chasing your benefits; we are escaping your bullets”.

On a warm September day in , we march on.
We march with heavy hearts, images of Aylan’s little body lying on that lonely beach,
still fresh on our minds. Will that image ever go away? I hope not.

Cries of “say it loud, say it clear, refugees are welcome here” echoes in ,
in some of ’s wealthiest avenues.

In an unforgiving land in , a Syrian mother marches too.
She carries a 2 year old in her arms and pushes a pram.
Her two other toddlers walk beside her, hand in hand.
The pram contains all the family’s earthly possessions.
What she managed to salvage. The dad? Probably dead.
She walks among thousands of other refugees.
Refugees with shattered dreams, destroyed futures.
The woman’s desperate tears and driving rain mix together.

We pass the Hilton, the Intercontinental.
Not one face looks out of the thick hotel windows.
Shameful indifference.

An Arab woman hurries through the revolving doors of the Hilton.
Her hands bulging with mostly Harrods bags.
She doesn’t even glance at the marchers. She has no time for us.

Many children are among the crowd.
Some are being pushed in their prams; some happily hopping along their parents.
A most hopeful sign. A woman with sight difficulties walks ahead,
her loyal her escort.

Will our voices be heard this time? 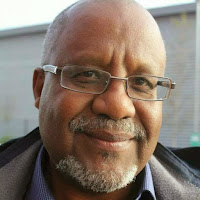 T-VINE columnist Ertanch Hidayettin is a Cypriot Turk of African heritage who came to the UK in 1970. A qualified teacher he chose to pursue a career in local government, working for local authorities in a variety of posts including as an Equality Officer for Islington Council, before retiring in 2007. Since then he has worked with the National Resource Centre for Supplementary Education (NRCSE). He is a community activist and a commentator in Turkish and Cypriot media.

RECENT ARTICLES BY THE SAME AUTHOR