A mixture of local and international filmmakers, media, politicians, business leaders and members of the public attended the Opening Night of the inaugural film festival. Festival director Yeşim Güzelpınar welcomed the guests, giving a brief overview about GIIFF, which she said had received over 100 submissions from filmmakers from around the world. She said the festival will "serve as a catalyst for new joint ventures as it brings a host of internationally renowned producers, directors, writers and actors to the island".

Süleyman Erol, the CEO of Creditwest Bank which is partnering the festival, talked next. He highlighted the importance of arts and culture in advanced societies in his speech, adding that he believes the film sector in Cyprus could grow and "join education and tourism as one of the major locomotives of our economy".

Dr Sibel Siber, the Speaker of the Turkish Republic of Northern Cyprus Parliament, also said a few words. She expressed her pleasure in seeing 20-odd films by Cypriots included in this year's Festival programme of global cinema, paying tribute to award-winning Cypriot director Derviş Zaim who she said was "an important role model for the younger generation".
After receiving his GIIFF Honorary Award from Oscar award-winning director, producer and writer Peter Fudakowski, Derviş Zaim told the audience that as someone born and raised in Cyprus he was elated to be receiving the award and that, "I look forward to a long career in film as I still have much to accomplish." 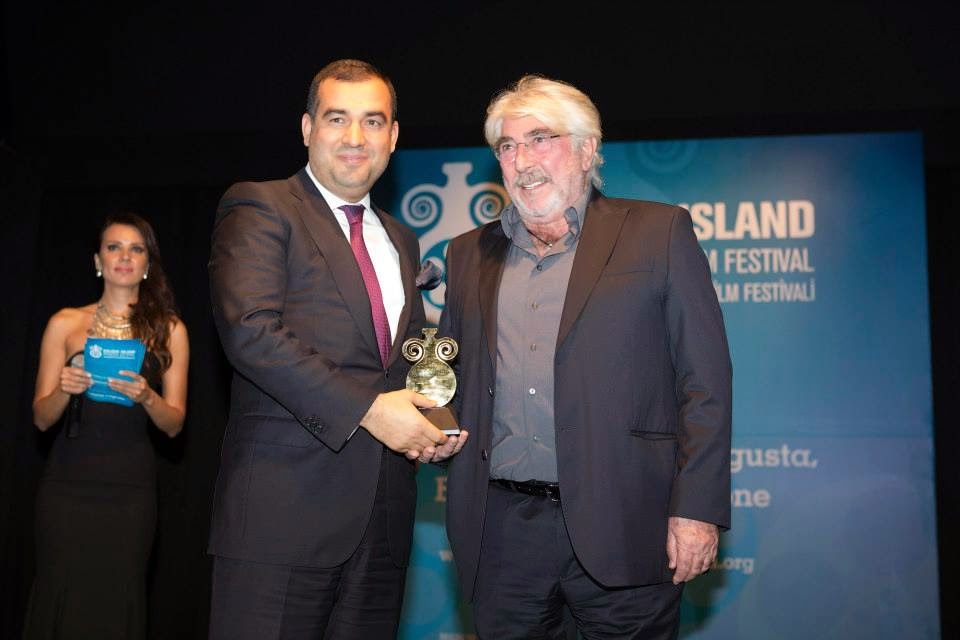 Erdal Özyağcılar was presented his award by Creditwest Bank's chairman Nusret Altınbaş (pictured). He separately also accepted an award on behalf of fellow actor Demet Akbağ, who was unable to attend last night. The veteran star, who has played lead roles in major film and theatre productions, along with hit TV series such as Elveda Rumerli and Yabancı Damat, told the audience he was "deeply honoured" to be a recipient of such an award in the Festival's first year.

The speeches then drew to a close and the opening night's film began. Making its Cyprus premiere, Fish is a touching tale about a family that turns to tradition to heal where modern medicine has failed. A fisherman, his wife and their young daughter who is unable to speak live in a tranquil village on the shores of a lake. Their story starts with the mother relying on local superstition to seek a rare fish she believes can cure her daughter. She finds the fish, but little goes to plan after, and their lives take a series of severe and unexpected turns when the father makes decisions that go against the grain of nature. The film stars Bülent İnal and Sanem Çelik, who have previously worked with Derviş Zaim.

Earlier, GIIFF director Yeşim Güzelpınar (pictured) said, “It’s fitting that Cyprus’ new international film festival opens with one of its most acclaimed directors, Derviş Zaim. His new film Balık sits squarely within our Environment cinema strand, tackling the strained bonds between humans and nature. The film is both beautiful and bold in message: here’s what happens if you keep messing with nature.”

The 1st Golden Island International Film Festival runs until Thursday 13 November 2014 and will screen over 50 features, documentaries and shorts and host Q & As with filmmakers in eight different venues. As part of GIIFF's commitment to Cyprus cinema awards will also be given for the Best Short Fiction, Best Documentary and Best Newcomer during next week's Closing Gala ceremony.
Some of the highlights of the Festival include Wolfskinder, a film which focuses on the orphaned German children in WW2 and which received rave reviews at last year’s Venice film festival; Champ of the Camp, which is the first ever feature-length documentary to be filmed within the labour camps of the United Arab Emirates; Ningen was screened at the Toronto International Film Festival to high praise and tells the story of Mr. Yoshino, a Japanese businessman who has to save his company from going bankrupt; The Empty Home has the honour of being the Kyrgyzstan entry for the Best Foreign Language Oscar; and Finding Family is a touching documentary about the true-life story of Oggi Tomic, a UK based filmmaker.

Visit the GIIFF website for the full programme and venue details.